Save With Shareagift Towards … A Trip To Paris

Last week we took you on a wild tour of some of London’s most random pubs, this week we are crossing the channel to bring you some of the strangest and most amazing pubs that Paris has to offer. If you are planning a trip to Paris this summer, or are looking for a reason to visit the French capital then look no further. We have chosen our top 5 most random pubs across Paris that are well worth a visit.

This backstreet bar in Paris may not look much from the outside but it not only serves some of the best mojitos in the French capital, it has a real wrestling ring in the basement. The pub has a Mexican theme and they serve a selection of tapas and cocktails including 10 different mojitos.

This bar in the Saint-Germain-des-Pres neighbourhood serves cocktails out of baby bottles which are named after children’s characters including Peter Pan and Snoopy. If you are looking for somewhere to kick back, suck on a bottle and watch some great cartoons then this is the place for you!

The Green Fairy is an old-fashioned café and absinthe bar in central Paris. This bar comes alive in the evening with a selection of different types of Absinthe served in the traditional manner. It can be drunk straight from the glass, with a spoon and sugar cubes or from the absinthe fountain on the bar.

Batofar is a large docked boat and inside you will find one of Paris’s most intriguing bar and nightclubs. The venue is known for bringing in some of the most internationally renowned bands and DJ’s, and it is rare for there to be a night without music trailing off into the early hours.

This quirky and weirdly decorated pub is a favourite amongst Parisian students. Many of the tables are made from strange household items including baths and sinks and the ceiling sports a retro disco ball with flashing neon lights. Happy hour lasts from 6 to 9 in the evenings and is usually accompanied with a themed night including karaoke and Mario Kart competitions.

Don’t forget you can use Shareagift to collect money online with friends towards a birthday celebration, celebratory drinks, a weekend getaway or just a random night out. Shareagift makes it easy to pool money together and donate towards a birthday fund, a group gift, a meal or a few rounds of drinks. Start a campaign and plan towards the perfect summer day out today!

It was announced this week that Margate in Kent’s theme park, Dreamland, is set to reopen its doors after having been fixed up and revamped for a new generation to enjoy. With this in mind we set about compiling a list of 5 of the strangest theme parks across the globe!

The first on our list is a new military theme park that is set to open in Russia. If you visit Patriot Park for the day you can play with grenade launchers, test heavy weapons such as the T-90 tank or an attack helicopter, take part in extreme sports and even enjoy army rations for lunch. Dubbed Russia’s military Disneyland this park is defiantly something different, that’s for sure!

2- Kingdom Of The Little People

This theme park’s popularity grew when it was featured on an episode of the TV show An Idiot Abroad. The park is located in Kunming, Yunnan in China and features performances from people with dwarfism. To work at the park you must not exceed 120cm and all the employees live in nearby houses designed for their height. Although this park is a very popular attraction many have criticised it for making fun of the dwarfism condition.

Pablo Escobar’s estate was converted into a theme park by the Columbian government in an attempt to cash in on his black market earnings. This park built on the drug smuggler’s estate includes a zoo, a bullfighting ring and a classic car collection amongst other strange artefacts.

This park located in Beijing, which has been dubbed ‘fake Disneyland’, has a castle at its centre that looks very similar to Disney’s. The park is full of weird and wonderful rides including an American safari where you go round and try to shoot at plastic animals! Many of the park’s characters which people have said look very similar to well known cartoon characters include a grey talking bunny, a mermaid, flying elephants and a large blue caterpillar! The owners, however, have clearly stated that everything is based on Grimm’s Fairy Tales… 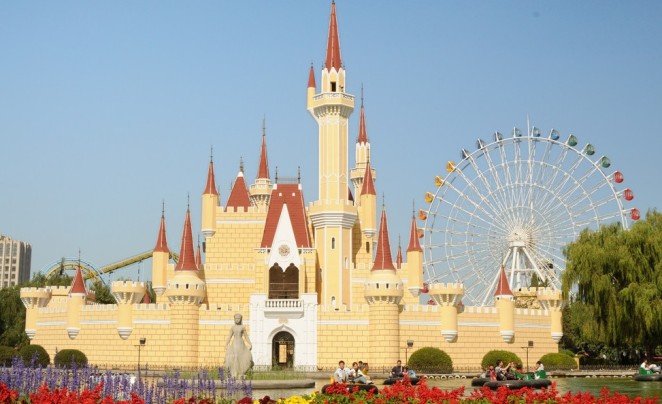 5- The Republic Of The Children

Said to have inspired Walt Disney in the creation of Disneyland, The Republic Of The Children is a giant city proportionally sized down for kids, which is located in Argentina. It has everything you would expect to find in a city including an airport, restaurants, hotels, a church and even a courthouse!

If you know that taking a friend to one of these parks would be the perfect day out for them, or if this has put you in the mood to visit a local theme park don’t forget that you can use Shareagift to raise the money you need to make the day out as good as it can be! However, if theme parks aren’t your thing then why not have a look at our alternative days out this summer or the top 5 most terrifying places to visit in the world!